When the Royal Navy withdrew from Rosyth and the Naval Base church was closed in January 1996, St Margaret’s Rosyth was formed from the congregation of St Margaret’s Anglican Church. We were invited by the then Methodist Minister, the Revd Malcolm Trew, to share the facilities of Rosyth Methodist Church. [This church, which seats about 120, is a modern building, designed by the architect Alan Mercer and built in 1970, and with a striking 30ft-high mural, painted in Byzantine style by Derek Seymour]

The St Margaret’s congregation was accepted into the Scottish Episcopal Church and we held our own worship, except on the 4th Sunday of the month, when both congregations united in a joint communion service, conducted by the Methodist minister.

After a few years of sharing the buildings of Rosyth Methodist Church, it became apparent that our future lay in association with the Methodists and both churches were keen to develop closer links. What was then called a Local Ecumenical Project (LEP) was discussed, which met with the approval of our then Bishop and the Superintendent of the Methodist Circuit. The LEP – now known as a Local Ecumenical Partnership – was initiated, a constitution agreed and a Covenant signed on 14 June 2000.

Our partnership has flourished. It bears evident witness to our life together in Christ and we have honoured and fulfilled the Covenant as best we can. We have been involved with the Scottish Churches National Sponsoring Body for Local Ecumenical Partnerships (NSB), whose responsibilities now lie with the Ecumenical Development Group, part of Action of Churches Together in Scotland (ACTS). 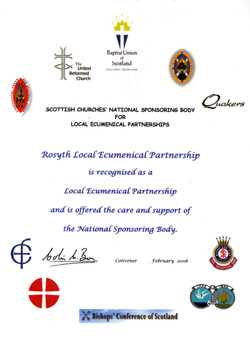 Recognition as an LEP: the certificate which hangs
between the original documents near the door to the sanctuary

At Pentecost 2010 (23 May) we celebrated the 10th Anniversary of our LEP with a joint Agape meal at which the Rev Lindsey Sanderson, secretary to the Sponsoring Body for LEPs read the Covenant document, followed by a period of silence for reflection. The service sheet is at this link, and a report, with reflections and other inputs, is at this link: both open in new tabs.

The Methodists are responsible for keeping the fabric and property of the church and other buildings in good working condition. We have a Licence Agreement with them for the use of the buildings, which is reviewed annually, and we are represented on their Property Committee and involved in all decision-making. We provide financial support for the church on a monthly basis.

As well as separate services which follow our own traditions, we worship ecumenically, usually on the fourth Sunday of the month, in a joint communion service led alternately by Episcopalian and Methodist ministers.  We hold twice-yearly joint Vestry and Council meetings, and participate in social, fund-raising and group activities.

Information is shared between two fellowships by using a common weekly notice-sheet, and by the wider circulation of “Contact”, the partnership newsletter, which is archived at this link.