The Bible and the Newspaper 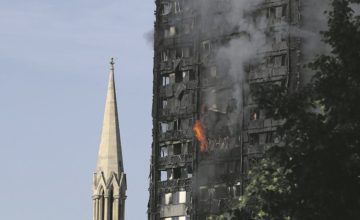 In his final speech as Archbishop of Canterbury, Rowan Williams said that the task of the church is to preach ‘with a Bible in one hand and a newspaper in the other’. So taking him at his word, I am going to interweave what we find in today’s Bible readings with what we have seen in this week’s newspapers.

So let’s see what happens:

Abraham looked up and saw three needy strangers standing nearby. “Quick,” he said to his wife, “get three bags of the finest flour and bake some bread.” Then he ran to the herd and selected a choice, tender calf, had it cooked and served it to the strangers. (Genesis 18)

A soup kitchen has spontaneously popped up in the heart of the Borough of Kensington to feed all those who have lost everything in the Grenfell Tower fire. Countless people have come from near and far bringing clothing, shoes, bedding, offering a bed for the night, toys for the kids, a listening ear or a shoulder to cry on.

People of every tribe and nation, race and language are pulling together and putting their differences aside to bring good out of the most awful adversity. The word on the street is of new life rising up from the ashes.

When Jesus saw the crowds, he had compassion on them, because they were harassed and helpless, lost like sheep without a shepherd.

The tensions that have built up between Muslims and ordinary Londoners has given way to common expressions of humanity.

These are the people Jesus called as apostles: Simon, Andrew; James and his brother John; Philip and Bartholomew; Thomas and Matthew the tax collector; James and Thaddaeus; Simon the Zealot and Judas Iscariot.

These are the people who came to help: Firefighters and ambulance crews; paramedics and nurses. Refugees and asylum seekers; People who voted Tory, Labour and UKIP; People with mental health issues and addictions; people not at all like us and people every bit like us. People who put their differences aside to do what needed to be done.

At the end of the day, as the American priest Dan Berrigan used to say: ‘Faith is seldom where your head is. Nor is it even where your heart is. Faith is where your ass is.’

Faith is not about sorting everything out in our heads and getting our thinking right about God. That’s called theology!

Nor is faith about chasing warm fuzzy feelings about God in our hearts. That’s called devotion.

Faith is about rolling our sleeves up, getting our hands dirty and mucking in to repair the mess of the world that God loves so much. And that’s called action!

Rowan Williams may well have retired as Archbishop of Canterbury but his challenge remains. With the Bible in one hand and a newspaper in the other, will we bring God’s vision to bear on the atrocities of everyday life, or will we dismiss Rowan’s challenge as ‘pulpit banter’, tuck in the ribbons, zip up our Bibles, and do all that we can to make sure the good news of the gospel doesn’t escape between now and next Sunday?