Pounding on the doors of injustice … 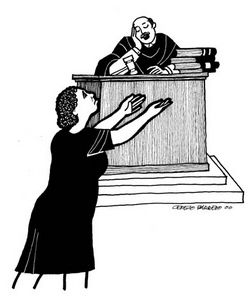 Pounding on the doors of injustice …
Cerezo Barredo’s illustration for Luke 18:1–8

During this month’s readings from Luke’s Gospel we reach the parable of the “persistent widow and the unjust judge” (Luke 18:1–8). The judge, who has no shame/respect, gradually relents because the widow is “wearing him out” (v5). This term, derived from boxing, literally meant to give someone a black eye, but figuratively meant to shame someone in public.

Through her “eyebrow-raising presence” – at that time in Jewish society a woman would never appear before the judge on her own – and her amazing persistence, this representative of society’s most vulnerable group exposes the judge for what he really is – someone with no true regard for the law, who devotes his life to lining his own pockets – and gives him the chance to remember some of the basic tenets of God’s economy (justice for all, and special care for the poorest of the poor).

What’s also striking is the fact that she’s doing this all by herself. Would she have had to fight so hard and for so long if even a few people had joined her in banging on the judge’s door?

But it’s not too late to join the widow: she and her descendants continue to pray without ceasing, and to pound on the doors of injustice every day.

From the archive of the “Radical Gratitude” e-mail resource.
Do read the full article, where you’ll also find
an interesting perspective on trick-or-treating.