As last week, you’ll be able to follow the service taken by Kenny in isolation at Trinity at 11:00am on Sunday 29 March. The liturgy is at this link, and the service itself will be on the Holy Trinity Facebook page. If your screen is big enough, open the links in new windows, rather than just separate tabs, and you should be able to follow both words and pictures simultaneously. 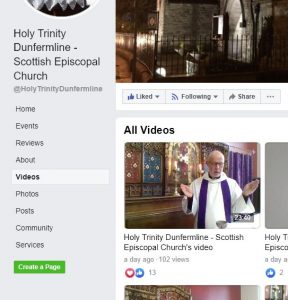 For those who aren’t used to Facebook: you won’t see the service on the Home page – you need to click on the Videos section of the left-hand navigation, which brings up a gallery of previous videos, as shown above. The most recent (an edited version of last week’s broadcast) appears in the top left of the gallery, and this will be replaced on Sunday by the live broadcast (marked by a red flag – Kenny has to go at less than 4mph!).

Being Facebook, you also get the chance to add your comments as the service progresses, or to rewind the video. It may not feel the same as being at church in person, but your sharing helps build community.