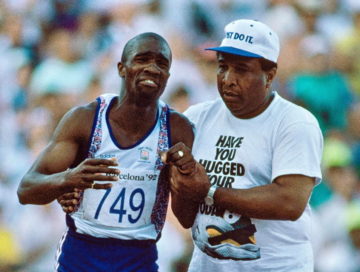 August 5th sees the start of the Rio de Janeiro Olympics, as the eyes of the world focus on the games. A number of New Testament letters make reference to Olympic sport including Hebrews: “Therefore, since we are surrounded by such a great cloud of witnesses, let us throw off everything that hinders and the sin that so easily entangles, and let us run with perseverance the race marked out for us. Let us fix our eyes on Jesus, the author and perfecter of our faith.” (Hebrews 12:1–2).

The Christian life is compared to a race, but although we face struggles and obstacles, there is a great crowd of witnesses cheering us on. We have a heavenly Father who loves us and a Saviour who has run the race before us. If we keep our eyes fixed on him, he will ensure we finish the race.

During the 1992 Barcelona Olympics, the British athlete Derek Redmond was running in the semi-finals of the 400 metres. About 250 metres from the finish his hamstring tore. He fell to the ground in pain and stretcher bearers came over to him. However, Redmond wanted to finish the race and so he started hopping toward the finishing line.

Suddenly Jim Redmond, Derek’s father, ran out of the stands towards him. “You don’t have to do this” he told his son. “Yes, I do” said Derek, to which his father said, “We’re going to finish this together.” They completed the lap with Derek leaning on his father’s shoulder. As they crossed the finish line, the spectators rose to give Derek a standing ovation. Although he didn’t win an Olympic medal, Derek Redmond finished the race with his father at his side. Let’s not forget the encouragement we have to finish the race!

Found in the Upper Holloway Baptist Church newsletter,
but on the web elsewhere and unattributed