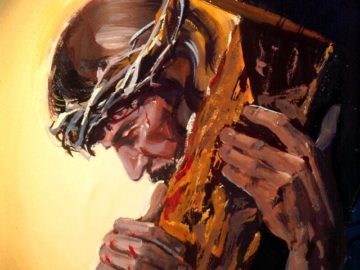 This was the unforgettable homily that the Rev Dr Michael Paterson gave recently to our congregation, following the reading of John 3:1–17.

I have a friend called Joe who has Downs Syndrome. He lives in L’Arche, a small Christian community which Jean Vanier founded for people with learning difficulties. Joe is a great guy and he loves nothing better than have people come to visit him – and when he sees you coming up the path, his whole face lights up and rushes out to meet you with one of those bear hugs which feels like it’s going to break your ribs! Joe doesn’t have much speech, but he communicates a huge amount of love in lots of other ways. Every time someone goes to see him, without fail he disappears from the room only to return a few minutes later with something he has found, it could be anything – an apple, a biscuit, a toilet roll, a book – anything at all which he then thrusts into your hands with the words – ‘for you’.

A few Easters ago his little community decided to put on a Passion Play during Lent and everyone was given a part. The helpers in the community were going to read the lines while those with learning difficulties were to mime the parts. As you would expect, various people were given the roles of Pontius Pilate, Simon of Cyrene, Veronica and the Centurion, but Joe insisted that unless he played Jesus he simply wasn’t playing – and of course he got his own way!

The rehearsals went on for weeks and finally the night arrived when all the visitors turned up to see this very special Passion Play. To everyone’s relief all the props stayed in place, none of the scenery fell down, the costumes fitted and everyone was in the right place at the right time.

The story unfolded as rehearsed until the crucifixion scene when, just as Jesus was about to breathe his last upon the cross, Joe, unable to contain himself in the presence of so many friends, beamed a huge smile around the room and cried out – FOR YOU – bowed his head and fell silent again.

Those lines were not in the script but somehow they were the only ones anyone remembered about the play that night. Joe had understood the heart of the story – that God so loved the world that he gave his only begotten Son FOR YOU, FOR ME, FOR US.

Joe can’t write – but for me he is an evangelist. Joe has very little speech – but for me he is a top-rate preacher. Joe will never have a career, own his own house, or be successful in human terms, but he is the richest man on earth because he knows, he really knows, and with a beaming smile to show it, that no matter what we are going through, no matter the hardships we have to bear, no matter the worries that keep us awake at night, God came into the world FOR YOU, for me, for US, and if we open your hearts and let that message sink in, then like Joe, we will have understood everything and never need to listen to a sermon again. Amen.