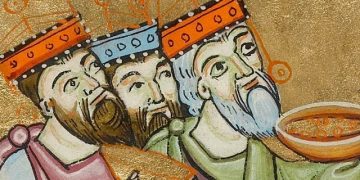 St Matthew tells us: “In the time of King Herod, after Jesus was born in Bethlehem of Judea, wise men from the East came to Jerusalem, asking, ‘Where is the child who has been born king of the Jews? For we observed his star at its rising, and have come to pay him homage.’”

In the post which you can read in full at this link, Fr Patrick Briscoe asks us to imagine the scene: the wise men (having entered Jerusalem and consulted Herod) left the city not having found that which they were seeking. They had come so far in their journey, arrived at the great city of Israel’s kings; yet the star had disappeared from their sight, and the king of that place, Herod, offered not enthusiasm for their quest, but concern.

And then, upon leaving the city, “They were overjoyed at seeing the star.” Other translations render this phrase, “they rejoiced exceedingly with great joy”, and the ancient text includes the redundancy for emphasis. It’s not random poor grammar or superfluous text – the evangelist is trying to tell us just how much it meant to the magi to see the star again.

Every Christian at some point in life experiences what the magi undergo. After setting out to follow where God leads, we can lose sight of our direction. As the magi get caught in Jerusalem, it can appear to us that our labours for God have been in vain; that our efforts to do the right thing or live justly have been for nothing. The promise of the Christian life is the continual re-discovery of the star.

… And they would not have even seen the star if they had not been so ready to get up and go. Fr Dermot Preston’s Prayer for the Day on 22 December ended: “Matthew contrasts these open-hearted foreigners with the closed religious authorities in Jerusalem. The magi were humble enough to recognise their knowledge was incomplete and, with eyes still open, they saw changes in the heavens and set out in search of truth – and were overwhelmed with joy when they found it. Lord: grant me humility and an open heart as I journey with you and search for truth.”