Engaging with one another 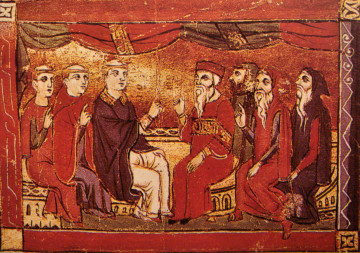 A debate between Christians in the 13th century …

Jim Mein’s sermon on 1 February on 1 Corinthians 8:1–13 tackled a far from easy topic that seemed rooted in the past, but has real significance in our modern world, as this condensed version shows …

Eating food offered to idols was a big deal, as the social life of first-century Corinth revolved round celebrations that took place in centres dedicated to one of many gods. Whether or not Christians should join in was a serious challenge to the unity of the emerging Church. Paul makes the point that idols don’t represent anything real, so anything to do with them has no relevance. However, he recognises that some people have beliefs they cannot just throw off, and it isn’t good to offend them or make faith more difficult for them.

Jim continued: “I know that living with differences is not easy – and I don’t always do it – but I do believe we need to open gates in the walls that divide us. I don’t think it would have created a healthier society if the early Christians had consistently refused to eat with other communities. I don’t think it makes for a healthier society when … any … group keeps itself to itself.

“It’s difficult, and I fail in it, but we need people to cross … boundaries – not to convert or attempt to make everyone the same. And not to suggest that it does not matter whether you belong to this or that faith or have this or that view. … I know others have different beliefs and there is a bit of me that recognises that they may have some valid, important views. … there are views that we should oppose with all our strength, but it is almost always worth getting to know a bit more about them first.

“I’m glad Paul did not totally ban our eating together with others and I’m grateful to those who cross boundaries today and try to interpret the views of others to us.”

Jim’s sermon included an invitation: “I believe, and often preach, that we must discuss differences, that the different cultures across the world need to engage with one another, to try and understand one another. Indeed this is the core purpose of the meetings in Lent that I’ve set up. I really hope that as many of you as possible will find the time, energy and courage to come out on Wednesday evenings and share a diversity of views on a variety of different topics.”

The full sermon, and details of our Lenten discussions, are at this link.