Do the little things 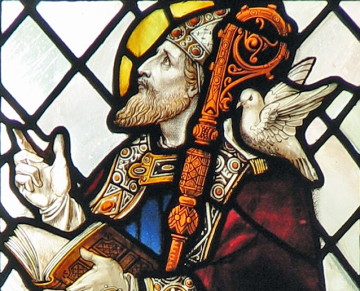 This month starts with a Sunday that our rotas describe as Lent 2, but is celebrated elsewhere as St David’s Day – Dydd Gŵyl Dewi – David being of course the patron saint of Wales. Stripping out the inevitable legend, it seems that David was educated in Cardiganshire, went on pilgrimages including one to Jerusalem, founded religious centres across England and Wales, and was named Archbishop of Wales at the Synod of Brevi in 550. He eventually settled at Glyn Rhosyn (now St Davids), in south-west Wales, establishing a religious community where he promoted a simple and ascetic life style.

St David is often shown with a dove on his shoulder, as in this stained glass window at Great Saint Mary’s, Cambridge. The bird symbolises the Holy Spirit which gave David the gift of eloquence as he preached the Good News of Christianity. But although he was reported to have been a great preacher, the message by which St David is most remembered is not a flowery piece of rhetoric but a statement about simplicity which comes from his last sermon.

When David died, he told his monks to “Be cheerful and keep your faith and belief, and do the little things, the small things you’ve seen me doing”. The former Archbishop of Canterbury, Rowan Williams, thinks that final phrase resonates with modern people because “… it reminds us that the primary things for us are the relationships around us, the need to work at what’s under our hands, what’s within our reach. We can transform our domestic, our family relationships, our national life to some extent, if we do that with focus and concentration in the presence of God.” Perhaps doing the little things is something that we should focus on during our Lenten pilgrimage.