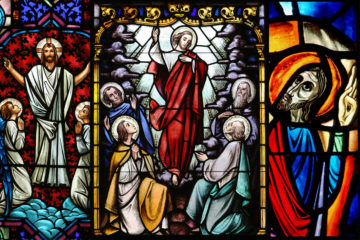 … and it’s Ascension Day, the day of the ‘acted parable’ through which Jesus demonstrated to his disciples that he was going to the Father, recorded by Luke in Luke 24:50-53 and expanded on in Acts 1:1–11. As Paul Beasley-Murray continues in his blog, the Ascension is “three chapters in one day”:

We don’t know when that final chapter might be, but we do know that Christ told his disciples that they should get on with the work to be done on earth. “The times and occasions are set by my Father’s own authority, and it is not for you to know when they will be. But when the Holy Spirit comes upon you, you will be witnesses for me in Jerusalem, in all Judea and Samaria, and to the ends of the earth” (Acts 1.7–8). As Dr Beasley-Murray says: “The mission of Jesus may have ended with the Ascension, but for us, the ascension marks the beginning of our mission. We have a world to win and a world to serve.”